A CLI user guide for managing billing groups and invoices

Written by Soumya
Updated over a week ago

⚠️Please ensure that you have the latest version of Aiven Client.

At the end of each calendar month, Aiven invoices you for costs accrued by Aiven services running in your project during the month. By default, we send one invoice per project, which is often just what you need.

In some cases however, you may want to group the costs differently. It could be, for example, that you want to have separate projects for your development teams, staging environment, and production services, so that production services are billed in one invoice, and everything else in another. In situations like this, billing groups come into play.

A billing group is a group of projects that share the same billing information (credit card, billing address etc.), and their costs are consolidated into a single invoice. In short, one invoice is sent for each billing group.

By default, a dedicated billing group exists for each project. In standard cases, this is transparent to the user. As before, you are able to configure the project, including billing information, using the project APIs.

To organize your projects to groups, you have to assign them to billing groups appropriately, which requires you to be aware of our billing groups.

Start by listing your projects and billing groups:

In this case, we have two projects, and can see that there's a billing group for each. We have already configured billing information (credit card etc.) for project 'test', and would like 'another-project' to appear in the same invoice, and to be charged from the same card.

How do we do that?

The solution is to assign all of you projects to a single billing group, one by one. In this case, let's use the billing group we already have for project 'test': 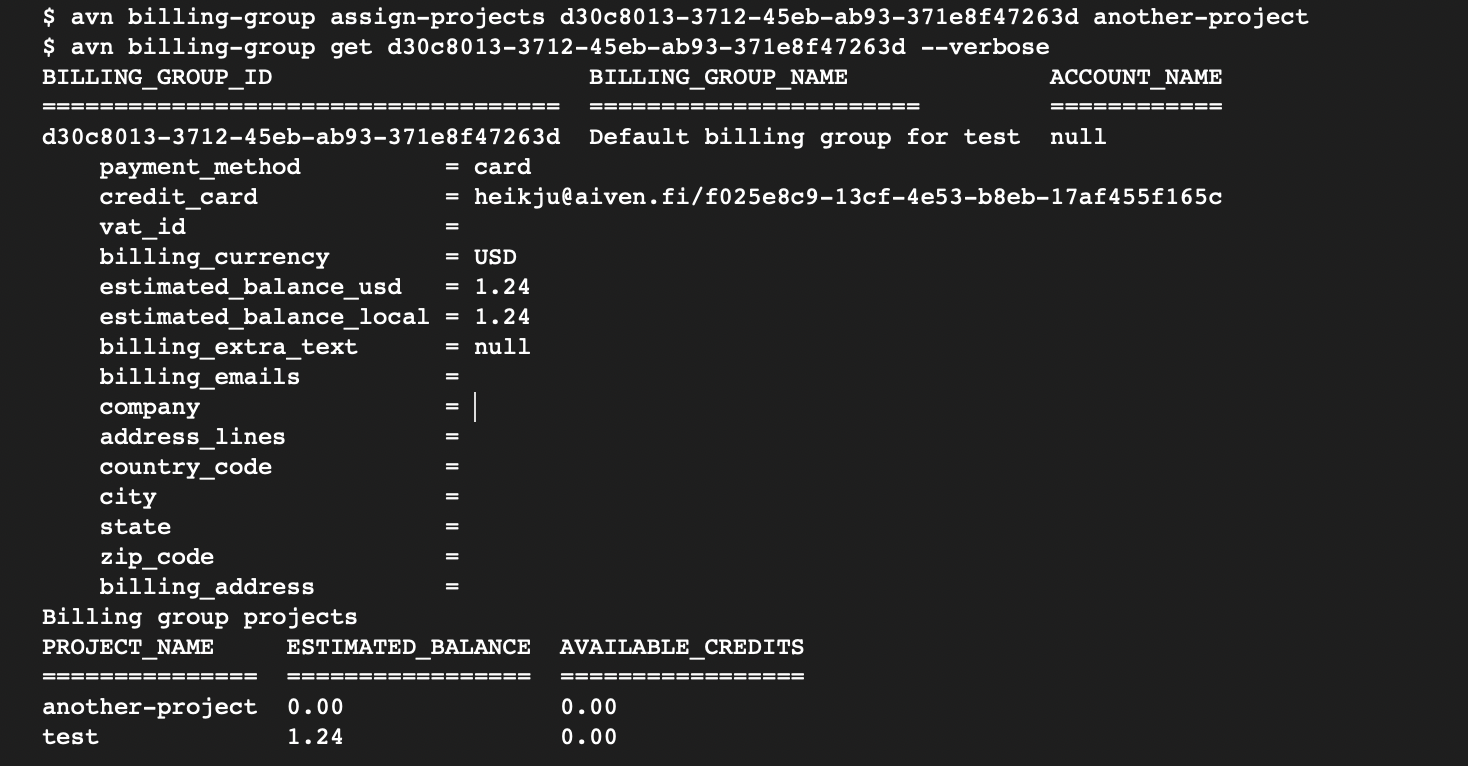 And that's it! When the month ends, you'll only receive a single invoice, containing both of your projects. Your credit card, if you're paying with a card, will only be charged once.

If we later decide we'd like to have separate invoices after all, we can create a new billing group and assign one of the projects to it.

Creating a new project in a pre-existing billing group

Each project must always have billing information defined, so when creating a new project, it is assigned to a billing group. By default, a new dedicated billing group is created, with only the new project as the member.

However, it's also possible to specify another billing group that the project should created in, which saves you the trouble of assigning it to it later. If you do this, then no new billing group is created.

First, find out the ID of the billing group that should hold the new project:

Create your project, giving the ID of your billing group:

And when you now query the details of your billing group, your new project is a member:

To assign a project to a new billing group, you should have administrator level privileges for both the project, and the billing group.

Credits too can be assigned at the billing group level, meaning the credits are applied on the invoice total that includes costs from all projects.

It's possible to list individual invoice lines for a given invoice. This can be useful for:

and anything else that requires details beyond the total amount of the invoice.

Lines which correspond to a time interval (such as service_charge lines) have timestamp_begin and timestamp_end set. This interval is always fully within the billing month; if a service remains powered on during an interval that spans several months, the cost is split between separate lines on each month's invoice.

For services and other resources billed per hour, one invoice line is created for each continuous interval during the billing month the resource is active and accruing cost. This means that if you first power a service off and then back on again, you may need to add up multiple invoice lines to get the total cost of the service.

In addition to past invoices, you can fetch invoice lines of the estimated invoice for ongoing billing month, but note that in that case, invoice contents may be incomplete. Service charge lines are created only for use up to the time the estimate was last updated, and other types of charges, such as use of credits, or special one-off charges, may be missing altogether.

Invoice estimates are updated periodically, so when moving projects from one billing group to another, the effect in the estimated invoice contents may not become visible until after an hour or two. The same applies to the PDF invoices downloadable in Aiven console.

Once a billing month has ended, the final invoice for that period is generated, which includes the projects that were in the billing group on the 1st day of the following month. After the month's final invoice has been generated, it's no longer possible to add or remove projects to or from that invoice.

These are the invoice line types that exist:

For more support articles please see our Support page or contact us at support@aiven.io

Did this answer your question?