All Collections
Services
EOL for major versions of Aiven Services

Written by Soumya
Updated over a week ago

End of Life (EOL) refers to the deadline after which affected Aiven services are retired and will be no longer supported nor maintained.

Since August 2020, Aiven aims to follow the EOL schedule set by the original authors and maintainers of the open source software, aka upstream projects. Once the upstream project retires a specific version, they do not receive security updates and critical bug fixes anymore by the maintainers.

Continued use of outdated services means that they no longer offer our customers the level of protection their business needs. Therefore, by following the upstream project's EOL schedule, we ensure that Aiven services are always running on supported versions of the open source software.

Aiven services inherit the upstream project’s software versioning scheme. Depending on the service, a major version can be either a single digit (e.g. PostgreSQL 12) or major.minor (e.g. Kafka 2.4). The exact version of the service is visible in the Aiven console once the service is up and running.

Aiven for Elasticsearch major versions will reach EOL on the same date as the upstream open source project's EOL .

Aiven for PostgreSQL major versions will reach EOL on the same date as the upstream open source project's EOL .

Starting with v2.5, Aiven for Kafka major.minor version will reach EOL one year after it's made available on Aiven platform. 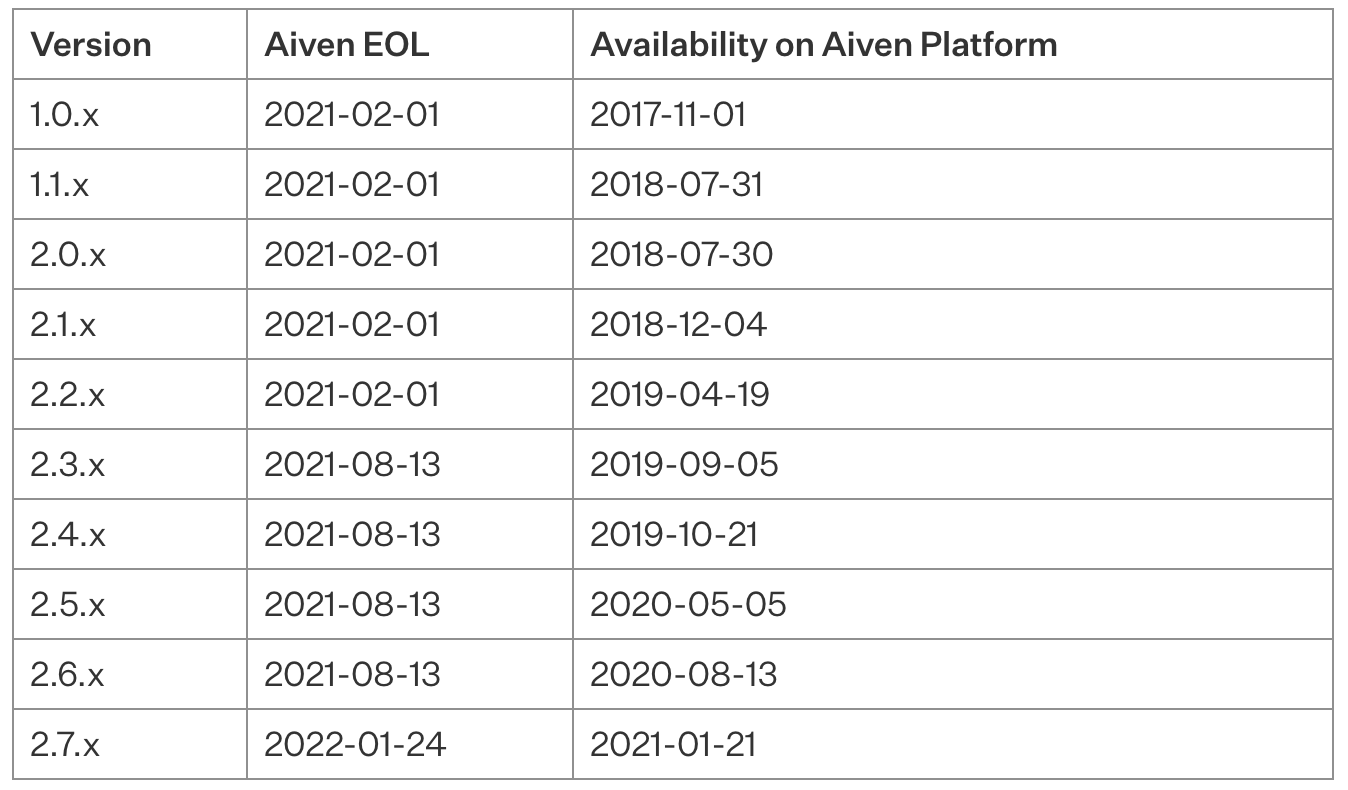 Aiven EOL policy is applicable only for services whose major versions are controlled by the customer.

It applies to both powered-on and powered-off services running the affected versions.

When Aiven defines the EOL date for a service major version,

We highly recommend customers to perform the version upgrade well before EOL so that they can test compatibility for any breaking changes, plan for unforeseen issues, and migrate to the newer version at their own schedule.

Aiven platform offers database forking as an efficient tool to verify the version upgrade so that customers can safely test compatibility without committing their production services to a one-way upgrade.

Tip: Navigate to the service's "Overview" page and scroll down until you see a "New database fork" button. This will allow you to make a separate new database service that is cloned from the current one's backups.

Did this answer your question?